Confessions of a homeschool mom: I sometimes felt annoyed with my children. My son Kevin seemed always to be playing chess, no matter what I said or did! To this day, I still feel annoyance swell up every time I hear a chess piece clunk down on a table. It makes me feel like someone should be helping me by setting the table, or doing anything other than playing chess. 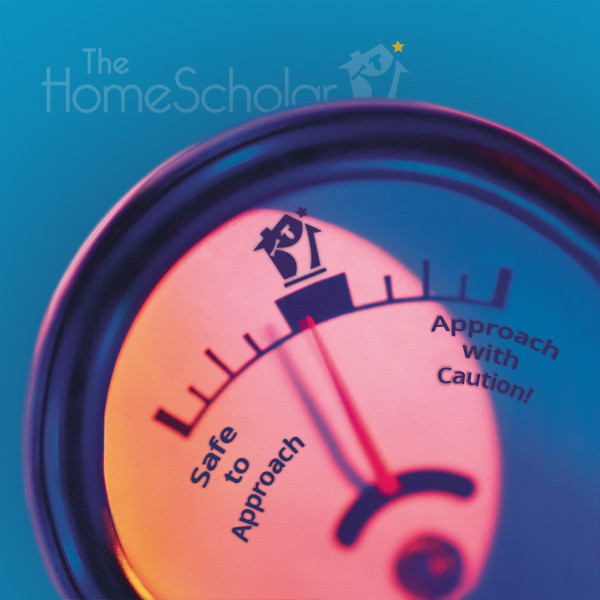 When I was homeschooling, it seemed every time I turned around, I could hear Alex banging away at the piano. Certain classical pieces still have "pet names" in our family. The "frantic plumber song" (A.K.A. Mozart's "Ronda Alla Turca") earned the name because it seemed always to be playing in the background during a plumbing crisis.

Sometimes the plumbing, chess playing, and piano banging came together in a "perfect storm" of annoyance, as demonstrated here:

Other times, it wasn't so much the noise of something, but the silence. The "sound of silence" usually meant Alex was reading an economics book instead of doing his math tutorial.

I can't tell you how many times I said "Stop playing chess!" and "Put that book down!" When a child finds their passion, they pursue it with all their heart and soul - and it can be annoying to Mom! We watch them "waste away" with the things that interest them, instead of pursuing things that WE value. It's a challenge to keep THEIR specialization OUR top priority.

I know I am not alone. I had a client a few months ago whose son was gifted in music. She said to me, "But it's not real music, it's just bluegrass." She was doing EXACTLY what I had done with chess and economics! Of COURSE bluegrass is real music! But of course, it can be very hard to support and encourage things we don't understand.

Being annoyed is… well, annoying! But it can also be helpful. No, I'm not kidding. You can use your feelings of frustration to help you determine what to write on a homeschool transcript. Let me tell you how to do it!

The 5 Benefits of Annoyance for a Homeschool Transcript

Annoyed homeschool parents should recognize the bright side of their frustration, as outlined in these benefits:

I suppose annoyance is less of a homeschooling thing and more of a parenting thing. But what we SAY when we are annoyed can actually help us with our high school record keeping. Listen carefully to what you say when you are annoyed at your kids, and you might get some informational clues about your homeschool transcript. I don't want to assume for a moment, however, that YOU are ever annoyed at your children! But here is what MY annoyance meant to ME.

Colleges look for passion in kids. For some reason (God's sense of humor, perhaps?) the things kids are passionate about seem to frequently frustrate parents. In terms of my own home, let me show you how this played out. Mom says, "Will you PLEASE put that down and do your work!" Often with Kevin, "that" was a chess piece. With Alex, "that" was usually an economics book.

It's hard to recognize specialization when it is so much fun for our students, too. Shouldn't they be working? They're just having FUN! If you are really struggling with specialization, remember colleges love to see passion. They see unique specialization in homeschoolers, and they love it!

What do your children do that drives you nuts? Could it be their specialization? An interest they are passionate about? Now I'll admit sometimes it can be them just wasting time, but if they are actively engaged in something, what is it? Put aside your preconceived notions about which interests are valuable.

For whatever reason, I notice parents sometimes see their child's faults easier than they see their strengths. A gift is something children will do repeatedly, over and over - to the point of annoyance! Check yourself, the next time you feel annoyed at your children. What are they doing when you say "Will you knock that off!?" Ask yourself, are you looking at their gifts? I know parents who have "pooh-poohed" some really wonderful activities because they thought they didn't have value. Some parents didn't think an activity was academic enough, others thought it was "too narrow." Some have dismissed an interest because it wasn't a college-level interest; it was just "messing around on the computer" with programming languages. So put aside your bias, and listen to what you say when you are annoyed. Ask yourself, "Could it be their area of specialization?" 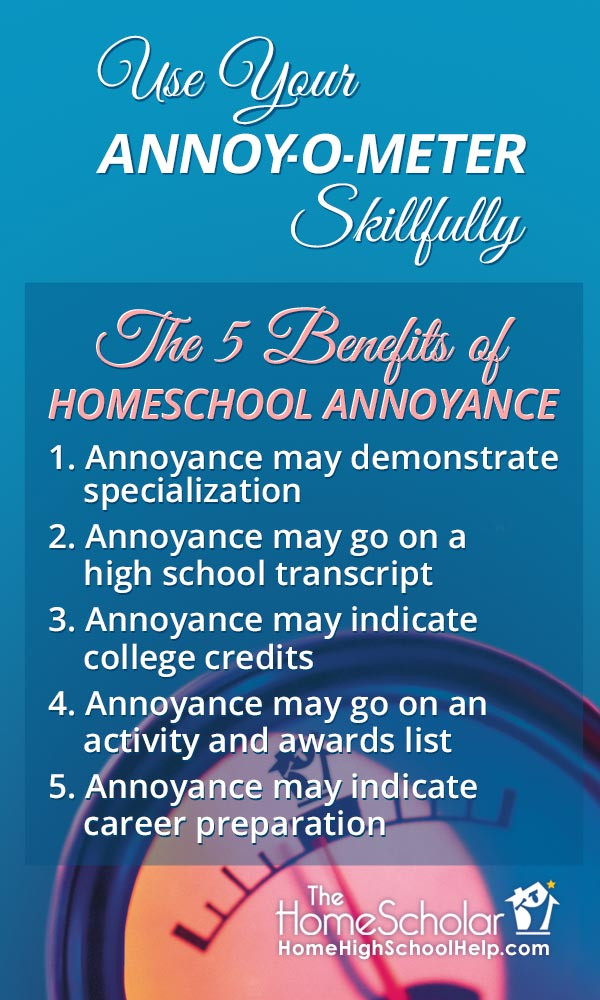 Scenario #2: Annoyance May Go on a Homeschool Transcript

Annoyance can indicate our subconscious grading criteria. Our frustrations can indicate what course work we have assigned. Think about this statement: "Aren't you done with your spelling words YET?" It indicates you consider spelling as part of their English class. Or what about this: "Is that all you want to read about?" It could demonstrate the child is working on a delight-directed course, and learning without any assignments at all! Can you figure out a course name for that delight?

And then there is the classic phrase, "You simply HAVE to put that down now and do some school!" That statement can help you determine credit value for your delight-directed course. How often do you say it? Once a week? Once a day?? Once an hour??? It may mean your child is spending more than 5 hours a week on the activity, and you might be able to count it as a high school credit. (And yes, I know for some kids it's more like five hours per day!)

Evaluate this statement, "I expect you to do a better job!" This can indicate your grading criteria. If they repeat the assignment until we decide it's acceptable, then they are working within some very high expectations. Success with high expectations should provide some good grades on a homeschool transcript!

Sometimes a child will annoy us with a skill that can be measured in some way. If your child has an interest in an academic subject, consider having their knowledge assessed. Even if you aren't "teaching" a class, the student may still be learning material because they are interested. This happened to me with my economics-loving son. I saw I was annoyed with his economics study, so I thought I should probably include it in his homeschool transcript. Although it felt like he read economics all day and every day, I felt too unsure of myself to give him a whole credit. On his transcript, I decided to write: Economics 1, Economics 2, and Economics 3 - all with a ½ credit value. Then I thought "just perhaps" he could pass an exam in economics.

This turned out to be a fateful decision. I discovered through CLEP® exams that he knew college-level information about economics (and other topics I never taught him at all!) Based on those test results, I revised his homeschool transcript with these course titles and credits: Economics - 1 credit; Macroeconomics - 1 credit; and Microeconomics - 1 credit. I gave him "honors" for all three classes. The CLEP® exam provided information about class titles, grades, and credit value. If your child has an academic interest, look into AP® exams or CLEP® tests to see if their annoying interest can be measured as college credit. 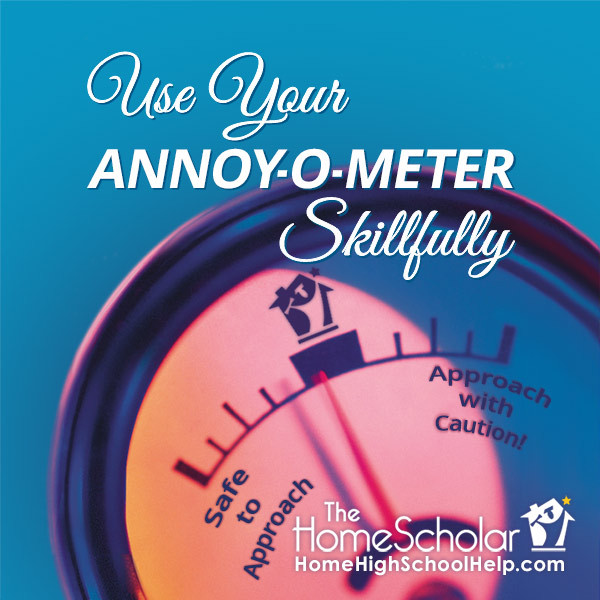 Scenario #4: Annoyance May Go on an Awards and Activities List

Some things aren't so much "core annoying," but are more "extracurricular annoying." If you have a child who competes or receives honors in an area they love, put it on the awards and activities list. Sometimes parents will laugh a little, and say, "You're not going to believe this, but he actually won ... " They will list some awards. Perhaps the child has actually sold some CDs with his band, or won a huge cash prize for playing "Halo." (I know both of these kids) Or, like my Kevin, perhaps they win chess tournaments.

All of these things can go on their awards and activities list - and the more the better! Colleges love passion, which means they love to see a LOT of a particular interest over all four years of high school. We may want our kids to be well rounded (I know I did!) but it also helps for them to have some activities they do ALL the time. Lacrosse for four years, youth group, or Eagle Scouts. When it comes to applying for college, four years of an activity is ten times better than one year!

As your child grows, often their interests will change. Yes, passion for a subject during all four years of high school is great, but you also want to expose them to MANY interests so the student can shape their ideas about a career. My son Alex loves playing the piano, but after years of playing he realized he liked it "for fun" and didn't want piano to be his career. You can let them change interests and move their focus from one activity to the next.

It can be amazing when they put all these pieces of the puzzle together. As a senior in high school, my son Kevin couldn't decide on a college major. Finally he decided chess was "problem solving," and electrical engineering was also "problem solving" - plus it had a lot of math! He has won awards in math competitions as well as chess tournaments. He decided to be an engineer because of his interest in chess and math. Each activity seemed isolated until he put them together, with a straight line pointing directly to his college major and career interest! So encouraging specialization, even when it changes, can ultimately help with career choices.

Use the information on their homeschool transcript. Let your frustrations be your guide in course titles, grades, credit values, and activities lists. Encourage their interests, as long as it's something they are actively involved in and not just laziness. Feed into their passionate pursuits. Learn how to put fabulous fun things on your homeschool transcript with this free book, How to Put Fabulous Fun on Your Homeschool Transcript: Convert Natural Learning into High School Credit. 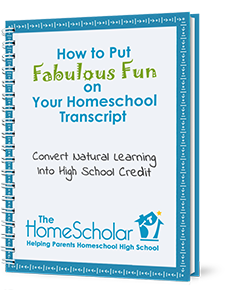 How to Assess Student Learning Without Homeschool Tests