College Admission High School
1755 Hits
2 Comments
Please note that as of January 2021, The College Board has discontinued SAT Subject Tests® and SAT® essay. California colleges can seem a little "homeschool-challenging" at times, but it really is possible to attend these colleges as an independent homeschooler.

Let's look at a private college, the University of Southern California (USC).  You have to provide some additional outside documentation, through testing.  They want to see at least 3 SAT Subject Tests. 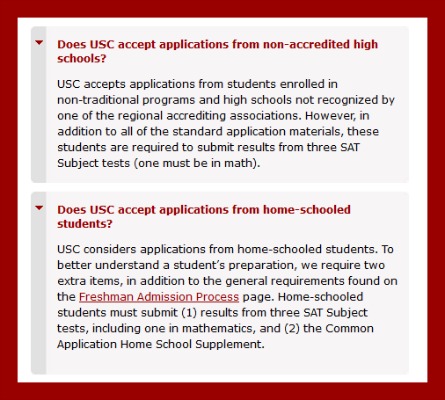 Now let's look at another school, UC Riverside, which is part of the University of California college system.  They have a non-test method of assessment, called Admission by Exception." Basically, the child can explain why they are exceptional and deserve admission without taking tests. They only have a few slots available for this, so I don't recommend taking this route unless absolutely necessary, but it's there is you need it.  But look at it again, just for a second. Notice how it says "some homeschoolers don't have transcripts."  You, my friend, CAN have a transcript. It's not too hard,you can easily learn how.  This free class will help: Homeschool Parent's Guide to High School Grades, Credits and Transcripts. 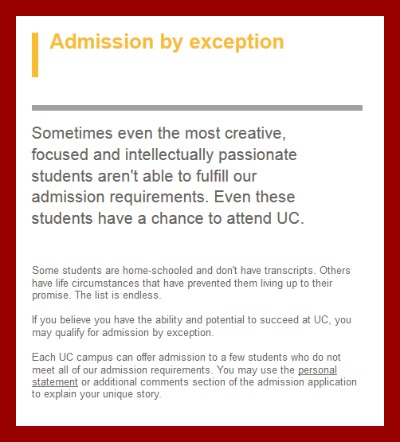 
They love you, they want you, they just want you to do some extra testing like many other public and private schools provide.  If you want to go there, it's worth the hassle, and if you don't, take your money somewhere else, and shop for a college that's more homeschool- friendly.  Either way, don't think they don't want you - because they do!

Thank you, SoCalLynn! I have made some edits to clarify.
Blessings,
Lee

0 Cancel Reply
Thank you, SoCalLynn! I have made some edits to clarify. Blessings, Lee
Cancel Update Comment