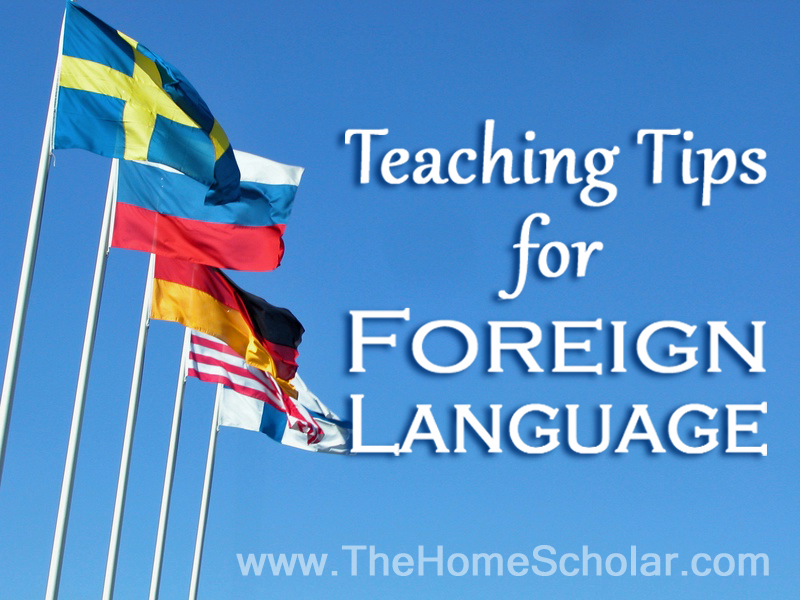 It's important to start your foreign language study early in high school, because some states require 2-4 years for high school graduation, and some colleges require it for college admission.  When I was homeschooling, I felt stumped on how to teach it, though!  So I collected a bunch of fun ideas in this article that I think will really help you. What will you learn in this article? 25 Great Tips!

Hard work and consistency are not popular in our culture. We often want things to be instant, easy, and fun! But there are some things in life that take hard work to achieve success. Learning a foreign language is a great example.  It takes time and effort. Unfortunately you can't just plop your kids in front of a TV and have them watch videos until-voila!-they speak French!  However, I know it's possible to teach a foreign language at home, even for homeschool parents who don't know a foreign language, because I did it myself!

When my kids were in high school, they learned both French and Latin, and it wasn't because I was so smart.  I never actually mastered either of those languages; they did. All I did was supervise, and make sure they did the work. Along the way, we figured out ways to make it fun and accessible. I'm pretty sure that if our family was successful, yours can be too!

My Child's Not a Genius!

Some people think that only smart children or gifted parents can learn a foreign language. But just because something takes hard work doesn't mean it's impossible for ordinary people.  Foreign language is like math, you just have to work at it a bit.  In fact, in some countries they don't think foreign languages are hard at all. Can you believe it? Most European countries teach several different languages during school.  In Germany, for example, children learn one language in elementary school, one in middle school, and then another in high school.  When you add that to their native language, that equals four different languages by the time they graduate from high school!  Of course, they get to cheat a little, because they can travel just a few hours to other countries to practice their language. We don't have that same luxury in the United States! But it clearly demonstrates that learning a foreign language is possible for just about anyone, even young children, and even average minds.

A while ago I was at a homeschool convention, and decided to do a little research into different foreign language programs.  During a lull in the busyness, I spoke to a foreign language curriculum consultant who confessed a startling truth. She said that it didn't really matter which foreign language program you chose, so long as you practiced for a minimum of fifteen minutes a day.  Without that daily practice, she said, a student will not retain what they learn.  With daily practice, even a moderately successful program can work. Practicing once a week for an hour is not nearly as successful as fifteen minutes every day.  Every. Single. Day.

While I agree that curriculum isn't as important as the regular practice, I do believe that you'll find the most success with a curriculum that doesn't assume you already know the subject.   Think about it this way. Most programs are written for schools, and assume the teacher knows the language.  So unless you know the foreign language already, use a homeschool curriculum that assumes you know nothing.  It will teach what you need within the program. Of course, if you do know the language your child is learning, that's an added bonus.

Read the complete article online to get 25 teaching tips!