Uncategorized HS English Consulting
2501 Hits
0 Comments
Are you ever unsure about how many English credits to give your students? Does your student spend more time on English assignments than they do on any other subject? These are common conundrums and you are not alone! 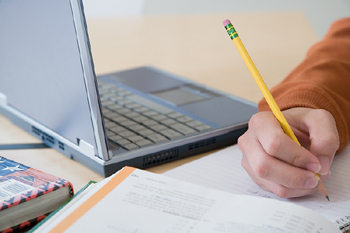 In answer to this I will tell you that there are some classes that simply take more time than other classes. Math, for example, at the high school level covers both Algebra 2 and Pre-Algebra. Math as a whole subject unit can take 2 ½  hours to get done and it’s still one credit. The same is true for English; sometimes it just takes longer than you think.

English is one of those areas that will often take longer than an hour. If you use a standard curriculum, then you want to give one credit for the standard curriculum that you’re using. It will include writing, reading, and different specific skills like grammar. It will most likely take your student more than one hour a day.

If you’re not using a standard curriculum, then sometimes you add too much; you put things together and it can be three hours a day and it can be too much English. You might want to monitor that. On an average, a child might spend one hour doing writing-ish activities and they might spend an hour a day doing reading-ish activities and together that would make one-credit class. It does take longer than you expect it to take.

Because I’ve done that in my life, I can honestly say I will never recommend to anyone to  do two years of English in one year. I thought I was going to croak; it was so hard to get that all done. I don’t recommend that you do two credits in any one subject unless the only exception is if that is what your child really wants to do because that is their Delight Directed Learning.

Sometimes, you do have more than one credit which happened to me. That was the year that my children wanted to take novel writing but I insisted that they also learned how to write an essay using Sonlight. I ended up letting them take “Learn to Write the Novel Way” but I insisted that they did English with Sonlight. So that year I did give them two credits of English.

Can specialty writing classes like creative writing or writing a novel in the year be recorded as an elective?

The answer is Yes! That was actually a difficult thing for me to decide when it was my turn to homeschool high school and I thought about it for a long time. I finally decided that for me, if any class would fit under a category, I would put it under that category. I only used the elective section when a class didn’t fit anywhere else.

My children actually did do novel writing one year in high school, I put it in the English section. That said, there is no right and wrong answer. You can do it either way that you want; I just thought that of it as an English credit that showed we had exceeded expectations in English.

Homeschooling is NOT the same as doing schoolwork at home.  There is LOTS of freedom!  My Gold Care Club will give you all the help you need to succeed!
Tags:
credits documentation english grammar high school homeschool reading Sonlight specialty writing classes standard curriculum writing writing a novel
×
Stay Informed

Scared? Listen to Your Heart
THANK YOU from Canada