High School
1122 Hits
0 Comments
So many important things to do, but it's hard to do it all! 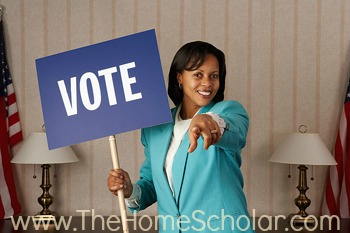 I remember when I was homeschooling, and how exhausting it was.  Matt and I were talking about all the things parents COULD do to help their children become strong and independent adults.  Then I thought about how exhausted I was by 7pm each night.  At that point I was tired of having meaningful conversations, tired of intentional parenting.  Just tired.  I know other parents are like that in the morning instead, LOL!  But I do want to encourage you to spend some time with your teenager and talk with them about voting. Time flies - and before you know it your teenagers will receive their first ballot.  Make sure they know what to do with it.

I was pretty intentional about teaching my children to vote.  We went over the voter pamphlet together, and I told them what things encouragement me to vote for a candidate one way or another.  When I knew the candidate or issue, we could discuss the specifics of their positions.  We would listen to a little bit of the news, from both conservative and liberal commentators, so they had some exposure to the views of others, and we could discuss debate their positions.

When I didn't know much about the ballot issue, we would look over the voter guide - who endorses that candidate or law?  Do I agree with the person that writes the endorsement?  We talked about who we liked, but more importantly WHY, giving concrete details about how it fits with my primary concerns as a voter, and how it would affect our lives in our homes.

I'll admit, we didn't do much of this voter training until my children were 16 and older, and when their own ballots were only 2 years away.  But sooner or later it become very important to intentionally teach this stuff.  You don't have to do it after 7pm or before 7am, of course!  You can find a time that works for you!  Just teach them to vote now, while you can still explain and discuss the details openly as a family.

In my next Gold Care Club webinar we'll be talking about things that go beyond academics.  Unless it's taught in the context of American government, teaching children to vote is probably not something that you'll put on a high school transcript.  Voting is definitely an area of homeschooling that is beyond academics.  It's still important - even urgent - and not to be missed.  Even for moms like me who are exhausted after 7pm and just need to crash.

Another feature of the Gold Care Club is the opportunity to ask your biggest questions about homeschooling high school.
Tags:
American Government ballot candidate commentators conservative
How to Cope with Lack of Motivation in Teens
Internet Addiction is Not New