Apr 24 Posted by Lee Binz in inspiration
It may look like we're nuts to other people.  Even though we may look a little strange to others, taking radical actions can often get fabulous results.  Remember the story about Jesus healing the paralytic? 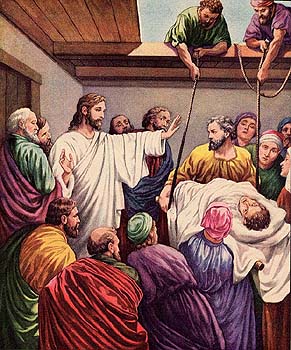 A few days later, when Jesus again entered Capernaum, the people heard that he had come home. So many gathered that there was no room left, not even outside the door, and he preached the word to them. Some men came,  bringing to him a paralytic, carried by four of them. Since they could not get him to Jesus because of the crowd, they made an opening in the roof above  Jesus and, after digging through it, lowered the mat the paralyzed man was lying on.

When Jesus saw their faith, he said to the paralytic, "Son, your sins are forgiven."  Now some teachers of the law were sitting there, thinking to themselves, "Why does this fellow talk like that? He's blaspheming! Who can forgive sins but God alone?"  Immediately Jesus knew in his spirit that this was what they were thinking in their hearts, and he said to them, "Why are you thinking these things? Which is easier: to say to the paralytic, 'Your sins are forgiven,' or to say, 'Get up, take your mat and walk'? But that you may know that the Son of Man has authority on earth to forgive sins . . . ." He said to the paralytic, "I tell you, get up,* take your mat and go home."

Four men brought the paralytic man to Jesus.  When the normal course of action didn't work, they had to think outside the box.  They were digging through a roof, and it doesn't get much stranger than that!  I'm sure the crowd was amazed.  "Well, that's just nuts!  I've never heard of such a thing!"  But how can you argue with results?  The paralyzed person was healed.

If you are new to homeschooling, don't worry too much about what people think.  Drawing outside the lines has achieved success for thousands of  year.  It's a radical action that can get fabulous results in your children.  Whether you walk in the front door, or whether roof-digging is your normal way to  enter a house, homeschooling can work for you!

You can sign up for our free monthly newsletter here.
Tags bible Jesus job Mark
PRINT