Carrot, Egg, or Coffee Bean: Which are You?

inspiration
2186 Hits
3 Comments
I saw a little anonymous story swirling around the internet. I have seen different versions, but I think it's a wonderful lesson for homeschool parents! 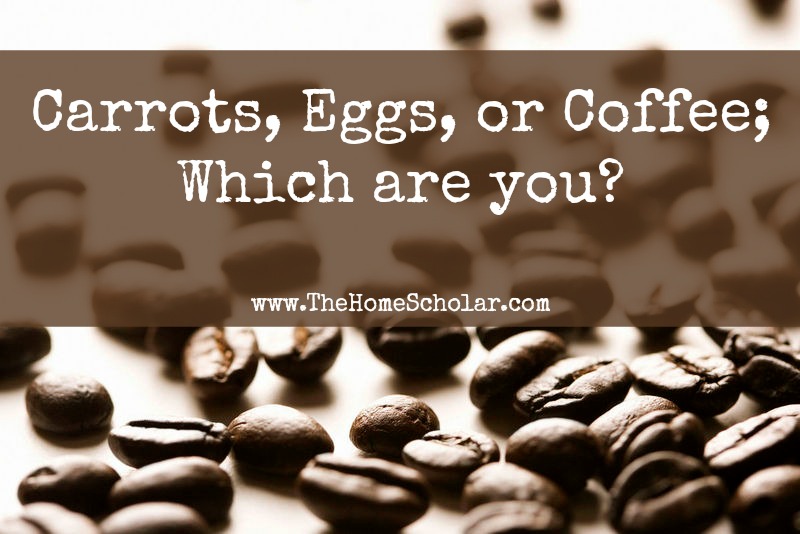 Are You a Carrot, An Egg, or a Coffee Bean?

A young woman went to her mother and told her about her life and how things were so hard for her. She did not know how she was going to make it and wanted to give up. She was tired of fighting and struggling. It seemed as one problem was solved a new one arose. Her mother took her to the kitchen. She filled three pots with water. In the first, she placed carrots, in the second she placed eggs and the last she placed ground coffee beans. She let them sit and boil without saying a word. In about twenty minutes she turned off the burners. She fished the carrots out and placed them in a bowl. She pulled the eggs out and placed them in a bowl. Then she ladled the coffee out and placed it in a bowl. Turning to her daughter, she asked, "Tell me what do you see?"

The mother brought her closer and asked her to feel the carrots. The young woman did and noted that they were soft. The mother then asked her to take an egg and break it. After pulling off the shell, the young woman observed the hard-boiled egg. Finally, the mother asked her to sip the coffee. The daughter smiled, as she tasted its rich aroma.

The daughter then asked, "What does it mean, Mother?"

Her mother explained that each of these objects had faced the same adversity — boiling water — but each had reacted differently.

The carrot went in strong, hard and unrelenting. However, after being subjected to the boiling water, it softened and became weak.

The egg had been fragile. Its thin outer shell had protected its liquid interior. But, after sitting in the boiling water, its inside hardened.

The ground coffee beans were unique, however. After they were added to the boiling water they had changed the water.

"Which are you?" she asked her daughter. "When adversity knocks on your door, how do you respond? Are you a carrot, an egg, or a coffee bean?"

Think of this: Which am I? Am I the carrot that seems strong, but with pain and adversity, do I wilt and become soft and lose my strength?

Am I the egg that starts with a malleable heart, but changes with the heat? Did I have a fluid spirit, but after experiencing death, a breakup, a financial hardship or some other trial, have I become hardened and stiff? Does my shell look the same, but on the inside am I bitter and tough with a stiff spirit and a hardened heart?

Or am I like the coffee bean? The bean actually changes the hot water, the very circumstance that brings the pain. When the water gets hot, it releases the fragrance and flavor.

If you are like the bean, when things are at their worst, you get better and change the situation around you. When the hour is darkest and trials are their greatest, do you elevate to another level?

How do you handle adversity? Are you a carrot, an egg, or a coffee bean?

As a homeschooler, are you a carrot, egg, or coffee bean? As you go through the trials and tribulations of homeschooling, the pressure can be intense. Don't become rigid and inflexible, bound by unnecessary rules or public school traditions. Don't become a carrot, and become mushy and squishy as you face the realities of growing adolescents with strong opinions and questioning attitudes. Instead, become a coffee bean! (You KNOW how much I love coffee, right?) You want to be like a coffee bean, so that you slowly and gently infuse your home with kimd and calm guidance.

This story reminds me of Goldilocks and the Three Bears; not too hot, not too cold, but just right. That's our goal, not too stiff and rigid, but not too soft on our kids, either. We are seeking to influence our children so they can learn and grow, becoming responsible adults.

Please note: This post was originally published in January 2013 and has been revamped and updated for accuracy and comprehensiveness.

Would you like to receive homeschool encouragement in your email inbox on a daily basis? Subscribe to The HomeScholar Helper here!

I needed this today. Thank you!

We're here to help, Kathleen!
Robin
Assistant to The HomeScholar

I love the analogies, Lee! Thanks for the encouragement :0)

0 Cancel Reply
I love the analogies, Lee! Thanks for the encouragement :0)
Cancel Update Comment